-Unique formula blocks body’s production and circulation of estrogen
-Gives the body a leaner, drier, and harder appearance
-Can be used alone or with muscle building protocol to maximize testosterone levels

With this and gyno being a worrisome matter when cycling ph’s its often been suggested that a good “Anti-Aromatase” or Anti-Estrogen be used during cycle and post cycle. Until now there were really no formulas available that could help in this area. Arimi -DX is our answer to that.

Arimi-DX uses a unique formula which helps limit the production of and block circulating estrogen. This leads to a harder more grainy appearance during a PH cycle and can even help users maintain a radically lower body-fat level. The beauty of Arimi-DX is that you can now use the stronger “Mass Compounds” like Mass Suspension, Testojet and Mass Caps without worrying about getting puffy and bloated.

Arimi-DX also is welcomed during the PCT phase of your cycle. Because estrogen levels tend to rise post cycle we see the body get softer. This is due to a decline in testosterone and a corresponding increase in Estrogen Levels.

Arimi-DX can be used Post Cycle to eliminate this and it will help increase natural testosterone levels as part of an even stronger PCT program. Arimi-DX is a “Must Have” addition to any serious PH Cycle or Post Cycle Therapy. Leaner, Harder and Denser muscle tissue will be the result of the addition of Arimi-DX to your cycle.

Suggested Use: 3 Capsules Per Day for the duration of your cycle and during your PCT program. 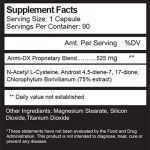